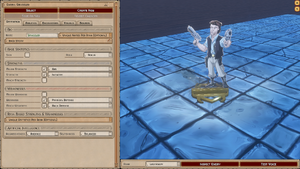 "Who's scruffy lookin'?" The smuggler will be our test subject for enemy creation.

Enemy creation allows you to create entities to fight, summon or transform into. It is often a bit simpler than hero creation (LINK), because you need no equipment, the visuals can be normal images and the number of required sounds is a bit smaller. Unlike heroes, enemies do not increase their power by equipping better items, instead they just gain additional base power by ranking up - making their stats completely predictable. This tutorial will cover all important parts to create an entity ready for battle and also explain the different roles and skins used by all enemies.

What do I want?[edit | edit source]

First of all, a few thoughts about what kind of enemy you want to create and how it will be used in the game can simplify the whole process. Do you want to make a story-driven villain, a ruthless hero-killing machine, a summoned totem or a transformation for your hero? Do you already have abilities prepared or will you create them as you go?

A few tips to simplify and maximize the effect of your creations:

First of all, your new creation will need a name and possibly unique names based on rank. You can add a unique name for each rank, which will overwrite the entity's name during combat and they are automatically used as tags to search for your enemy.

Next up comes the role and (optionally) skin selection, which will set some basic strengths and weaknesses for your enemy, making it easier for players to know what they're up against. The smuggler for example, is simply a rogue which means he has increased back power, critical chance, speed, health and armor penetration, but reduced support. You can play around with some other roles or apply a skin to see how his stats change - you could make him a watchful rogue and increase his back and flank defense (at the cost of the other statistics of course).

You can find a complete list of all strengths and weaknesses set by these at the end of the article.

Similar to hero creation (LINK), you can also choose up to 3 additional strengths and weaknesses to further tune your creation to your liking. Our unshaven friend has increased aim for example because he only relies on ranged attacks while his deficient back defense is somewhat compensated by his reactive [Shoot First] which turns him towards any potential attacker. You can also choose one additional strength or weakness for each rank, with the option to set it as active at only this specific rank (for example, a novice fighter could lack initiative). It is important to remember that the strengths and weaknesses will increase with the entity's base power and thus by rank: A legendary marksman has an automatic mobility weakness, rendering it immobile at legendary if not accounted for! Experimenting with the different settings and their consequences might take some time, but it will also lead to much more satisfying results.

At last, you can set a general A.I. behavior, choosing how aggressive (attacking enemies or staying away from them) and supportive (using friendly abilities on oneself or other allies) your creation shall be. For most cases, the standard settings will probably suffice (and you don't have to consider them at all if you're only creating a player-controlled or passive entity). 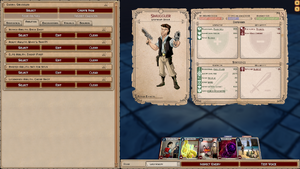 Our legendary rogue is a good example of growing complexity and building up a combo: His back shot is hard to trigger at first, but combining it with [What's that?] allows him to set the stage perfectly. At last, his [Cheap Shot] reaction can trigger as well when turning an enemy away, thus combining three abilities into a devastating attack combo.

Next up is choosing some nice abilities that your enemy will feature - you can select up to five abilities, one earned at every new rank by your creation. If you leave an empty slot, the system will automatically duplicate one of the lower ranked abilities. Unlike with heroes, the abilities' rank will automatically rise: An elite werewolf will therefore have three master-level abilities. The most important part here is probably gifting abilities in a logical order, which not only increases the possibilities of your creation, but also allows for more interesting combos.

Don't do that! - Helping the A.I. getting it right[edit | edit source]

Sometimes, especially when building a story-driven enemy, the A.I. might use abilities combining positives and negatives in an unintended way - for example using a defense-up with mobility-down on an enemy instead of a fragile ally. Or attacking an enemy before using defense-lowering debuffs first. In this case, it might be necessary to make their abilities a bit more complex using conditions or reactions with to make sure they work as intended. Using allegiance conditions can ensure the right target, while commands (reactions that can trigger during your turn) can make sure the entity is forced to use a certain ability if possible. Otherwise you can try changing the A.I. settings, especially aggression, for a more satisfying experience. 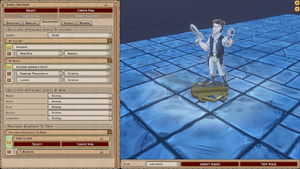 The smuggler is only encountered in the Starship tileset and especially often in the transporter and cargo room. He can appear with the same rate at any given rank and has an preferred drop - the Blaster.

Here I am - Setting the appearance chance[edit | edit source]

In this tab, you can define where and how often your creation can appear as an enemy. You can either use a global appearance rate (for every tile- and subset), go by general layout (Starship, Dungeon, Forest Village, Giga city, Haunted House, Japanese, Steampunk, or Post Apocalyptic) or by room (e.g. the Starship bridge). A more detailed setting will override any previous setting: Room > Tileset > Global. For example, the smuggler has a slightly higher appearance chance in the transporter and cargo room of the Starship tileset, a normal rate in the Starship in general and no global appearance (to prevent him from spawning normally anywhere else, like the haunted house).

Enemy visuals are a bit easier to create than for heroes, because most pictures can be imported and used right away! PUD features an auto-cut mode to remove unnecessary backgrounds or just accepts any image with transparency as is (Gimp might be a useful tool for this). You can also choose one of eight animation styles for your creation, ranging from just standing still to a shambling zombie (of course, this doesn't affect the entity's performance in any way). Next up, you can scale the selected image within certain limits and even set a different height to display for each rank - usually boss enemies tend to be larger, but you can choose freely.

The body part positions are an optional, but very useful setting to complete your creation and help the media system target the right parts of the image supplied. You can specify the points for primary and secondary equipment, the head, chest and groin area, hands and feet - which are all used as part of the media and particle creation system (LINK). Usually, the equipment is the most important part, as most attack animations make use of them, but head and chest might we useful as well. You can play around with the smuggler's primary equipment for example and head over to ability creation and check out his new animation (automatically creating a new copy when saving).

The very last and often overlooked part is only important if you plan on using your creation for a custom game (LINK): The dialogue representation let's you choose different speaker images and sounds based on emotion and an standard audio for the sound made when writing his speech text. This is only of importance, if the enemy's image is to be replaced or if you need several different mood representations, otherwise you can use any enemy's image as a speak in game creation.

At last, you can select or create a set of sounds used by your new creation. You can import soundtracks of up to 5 second length and use them for more or less specific actions (like a general grunt that might play when hit or using an ability or a a few lines to say at the start of each turn) or just select an existing one from the game library. You can also specifiy the relative rate these sounds are used and change pitch and speed of the entity based on its rank.

Keeping it short is often advised, as a lot of sounds might overlap, for example the turn start and move action will often play together, because the A.I. might start moving while the turn start sound still plays. Also, hit, critically hit and death sounds might play at the same time. If you notice that a sound is too long, you can directly cut it in-game and also apply fade-in or -out effects right after importing.